What is traditionally written on a judo belt?

I recently passed a Dan exam and would like to get rid of my old, cheap belt.

I would like to buy a higher grade belt and have some inscriptions on it. I plan to take a Kusakura obi with the Kodokan emblem.

I wanted to write 柔道 (Judo) on the side with the emblem and my name パスカル (Pascal) on the other side. 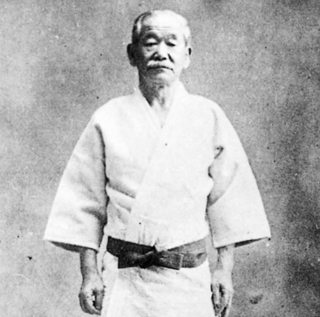 However, embroidery is a long established textile art in Japan, and as judo became more popular it was common for students to embroider their name on their judogi and belts to distinguish them at training:

It is ideal to carry the Judo-Gi in a bag, folded properly. To preclude loss, use small lettering or printing to mark your name on the lower left side lapel, upper trousers and belt.

This practice became something of a tradition in Japan, and hence was passed on to western students who trained there:

She was also presented with a handmade judogi from her principal teacher, Umetsu; Noritomi gave her a judo belt with her name embroidered upon it.

Eventually becoming something of a trend in western dojos also: 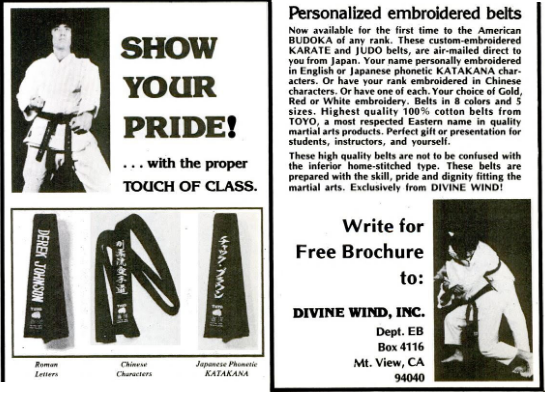 It has become popular to wear a belt with your name embroidered down one side and the organisation (judo, karate and so on) down the other. There are some firms that ...

It is not uncommon to see on belts with embroidered names the person's club/dojo's name also (on the opposite end). This is often more dependent on the tradition of the dojo itself however:

There is further use of the uniform to express group membership, especially in arts like judo and kendo, where large groups of practitioners get together for tournaments. Patches bearing the name of the dojo are frequently sewn onto uniforms and are both an expression of pride and membership.

Such patches are important expressions of allegiance even within the dojo itself. In my study, I noticed that new students generally did not wear such patches, while senior students did. Only when beginners became more involved with the dojo, grew more skillful, [sic] and in fact became more well integrated into the fabric of dojo society, did they generally opt to wear these badges of social identity. In the judo dojo I studied, for instance, it was really only after the first kyu promotion, when the student could exchange the white belt of a novice for a colored one, that he really began to feel an accepted part of the dojo. A short time after many students donned their first colored belt, they also began to proudly wear an embroidered patch whose Japanese characters spelled out the name of the dojo.

While traditionally dan grades were not distinguished by belt (asides from the black/red-white/red colour), tabs are sometimes added to signify the level of dan grade in Japan (similar to how mon are used in e.g. the British system for juniors). I suspect this is due to influence from Karate where this kind of marking is common. 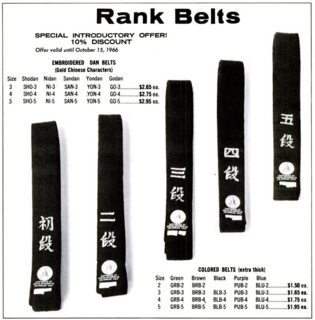 According to current regulations, in IJF competitions belts (in addition to the mandatory "IJF Approved" logo) may only include one instance of the athlete's name on a 20x4cm patch at one end of the belt: 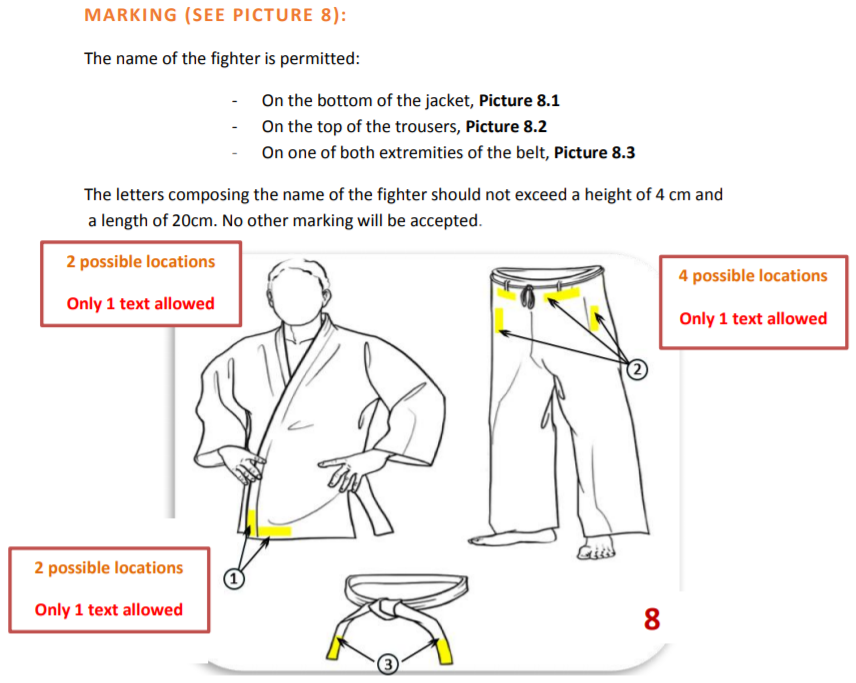 Well the most traditional thing to write is nothing. :)

I recall my Judo teacher just had a plain black belt when she was teaching. In fact, I didn't even know what dan ranking she was, because she didn't put any stripes on it. It was only after my second school year with her (this was in high school as an after-school club) that I saw her wearing a belt with stripes on it. And to my astonishment after counting the stripes, I realized she was a godan. My jaw just dropped. In none of the time she taught and in none of her class information sheets did she mention her rank. I just assumed she was 1st dan the entire time. Haha.

That being said, it's fine to be proud of your school and your status as a black belt. Just be humble about it.

If it were me, I would have two belts. The first belt would be the belt I wear in class. It would just have tape for the stripes and nothing else, no embroidery. I figure this one is going to be destroyed over time, so there's no point to having it embroidered.

For your second belt, that's where you might want to get fancy. You can have embroidered stripes on the left side and your name embroidered on the right side. If it were me, I'd just use English characters for my name, because I have an English name. That's a very popular thing to do, instead of using katakana. I think the Japanese would actually think it's "cool" to do that.

Leave room for more stripes to be embroidered on later. You might add the kanji for "judo" somewhere on it. You can also put your school's name on it somewhere, maybe the part of the belt that would go along your back. Or you can write your school's main organization (BJA for example).

Some people embroider a motto of some sort, sometimes with small kanji font in two rows. Just pick one that suits your personality. You can put this on the same side as where your name goes.

This fancy belt you only use on special occasions, and never during training, randori, or competition. It's just for show.

Congrats on passing your exam. I think the best person to answer your question would be your Judo instructor. Each instructor has his or her own idea about what is appropriate. What we tell you may not be appropriate for your school.

In my case I belong to two schools, and in one of them, for competition purposes, we are required wear bars on the end of the belt on one side, with the name of the school on the other side. The other school I'm with doesn't compete, and they do not adorn their belts at all.

I do like steve weigand's idea of having two belts, one for show (I guess, hanging up on a wall or a window box?) and the other for practice and competition, etc.

I do recall my last Taekwondo school was funny, and I think this is fairly common. All the incoming Korean instructors, coaches, assistants - they liked having their belts embroidered in English. English names are a thing in Korea. Here in the US, most people like to see Korean writing. I guess it's a thing here, too.

Whether you have yours in Japanese or English is up to you (you might even do both). But it seems everyone likes to use "foreign" lettering.

I have read that at the Kodokan, it is traditional just to have your name embroidered. This is a matter of practicality--everyone in many classes wears a black belt, so you just need to be able to find yours.

In the US, this is not typically a problem--one rarely finds a class that has so many black belts that you could lose yours. Most Judo black belts here have nothing on theirs, and I associate highly decorative belts with so-called "Traditional Martial Arts".

Keep in mind that the design of the white judogi by Kano in part represents the values of simplicity and lack of ego...

Because, as I said, it is typical to have your name on the belt at the Kodokan, I have softened in my view towards doing so. But I still feel mixed about it at best.

If anything else was going to go on the belt, I would say having 'judo' in kanji would probably be the one thing that is ok.

I might contrast this with BJJ, where I feel no qualms about self-expression through 'loud' gear... Also, when I had looked into a nice belt, I was leaning towards kataaro over kusakura. I don't remember why, exactly, but you may look into that.

In the end, it's your life and your journey, so enjoy the belt you've earned however you see fit.

Not the answer you're looking for? Browse other questions tagged judo history equipment belt or ask your own question.

2
Getting my (do)gi white again
9
Is taking away a belt appropriate discipline?
8
Why do teachers skip belts?
0
Is there a martial art where exams can be taken at will?
8
Origin of kawazu-gake?
3
Are Biceps Slicers legal in judo?
5
The name of a throw where the tori starts from a headlock
8
Founder of a martial arts system passed away. How can current Black Belts move up in the system?
5
With whom do judo beginners train?