The other answers detail the differences in legal techniques, rules, and scoring and how these explicitly and more subtly influence the style of the sports, but one neglected point is the effect of attire.

Judo is jacketed, whereas most other forms of wrestling wear limited or skin-tight outfits. Ability to grip their clothing vastly changes the opportunities for and most efficient means of controlling your opponent. As such, in judo a lot of focus is spent on getting a good grip on your opponent's jacket (while standing, and also their trousers while in ne-waza) and preventing them from having a controlling grip on your own, as this is the starting point for setting up a technique.

The traditional judo grip for executing a technique is gripping the collar/lapel and sleeve, but many others are common: 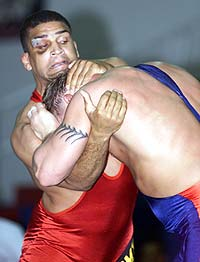 6
When was throwing introduced to martial arts?
8
What are the main differences between gi and nogi Brazilian Jiu-Jitsu?
5
Are there any overlaps between the Judo kodokan techniques and Sumo's kimarite?