Tomoe-nage is often translated as "stomach throw" or "circle throw", but these are not direct translations. What does tomoe mean, and why is the throw called this?

Tomoe (巴) refers to a circular anti-symmetric symbol commonly found in Japanese heraldry. The usage in the judo throw specifically refers to the two-tailed version, futatsu-domoe:

This is very similar to the Chinese taijitu ("yin-yang" symbol) ☯, or Korean taegeuk (famously appearing on South Korea's flag) 🇰🇷.

Tomoe-nage is named as such because Kano thought the positioning/movement of tori and uke's bodies resembled this symbol during the throw:

Master Kano bestowed this technique with the name tomoe-nage. In Judokai chabanashi (from Judo, published by Judo Kai Honbu, 1916), it says:

"Master Kano was an expert at tomoe-nage. This was originally a Tenjin Shinyo-ryu technique named Ando-gaeshi, after an certain Ando who was skilled in the technique.

It was at that time probably named along with uki-waza, or called Kano-nage or Kano-gaeshi. 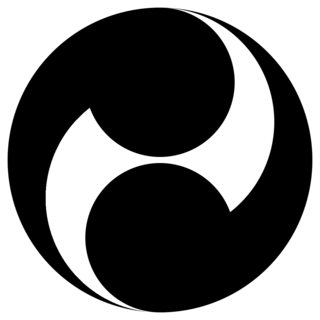 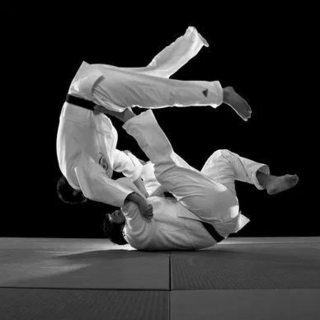 Not the answer you're looking for? Browse other questions tagged judo terminology japanese throwing or ask your own question.

8
Origin of kawazu-gake?
3
Why is a "scarf hold" so-named if you don't wrap around the opponent's neck (like a scarf)?
3
Origin of kata-guruma?
2
Etymology of Yama-Arashi?

8
Etymology and meaning of ukemi
8
Under what conditions would you prefer o-guruma to ashi-guruma?
5
Judo throw/techniques for taller people
3
Why is a "scarf hold" so-named if you don't wrap around the opponent's neck (like a scarf)?
7
What is kubi-nage?
2
Etymology of Yama-Arashi?
2
What is "Tengu-nage"?
9
Should I give up my back on purpose so that I can do this throw?
5
Why is judo's Katame-no-Kata so free-form relative to Nage-no-Kata?
6
Who are Tori and Uke?