Why was blue chosen to distinguish competitors' judo-gis?

In the 90's the IJF introduced a requirement for one competitor to wear a blue gi, and the other a traditional white gi, in order to better distinguish them during high level competitions.1

Was there any reason the colour blue was specifically chosen?

Historically in Japan a red sash was added to one competitor's belt for the same purpose, and darker indigo has more traditional history in Japanese arts than the Pantone 285M - 286M specified by the IJF (and is indeed used in e.g. Kendo and Aikido), so I'm curious if there was any specific reason a lighter blue was chosen.

1. Introduction of the Blue Judogi, the New Tradition

One major reason for the change (in addition to making refereeing easier) was to make judo more appealing to TV audiences, and in this the IJF explicitly disavows any responsibility to adhere to Japanese aesthetic or traditional values (and hence no pressure to consider e.g. indigo):

As the birthplace of judo is Japan, the techniques and spirit of judo are qualities which we should strive to develop as members of the judo community, however it is not the responsibility of the judo community to spread the Japanese culture through promotion of its traditions.

Early reports of the blue judogi's use pre-adoption by the IJF make note of it specifically being chosen for its 'dazzling' effect on TV, and hence would explain why a bright blue was chosen:

From next January 1, the judo competitions at European level will be held with one competitor wearing the standard uniform and his opponent wearing a striking blue jacket and trousers which should dazzle television viewers. One thing will remain the same for both fighters, however - the traditional black belt.

In certain respects1, it is like the process of liberalization of agricultural imports. Pressured by judo circles in Europe, Japan will likely have no choice but to approve the use of color uniforms in the ancient sport.

One competitor would wear a traditional white uniform, as in the past, while the opponent would don a blue outfit2. With such a color distinction, it would be easier for the referee to make decisions and also help the audience understand the match. Besides3, color uniforms look better on TV. Citing such reasons, Anton Geesink of Holland, who won a gold medal in the open4 weight division in the Tokyo Olympic Games, and others have promoted color uniforms.

As for [the Japanese argument5 against the trend that the white uniform is the symbol of a pure heart and should be preserved as a tradition], Geesink has said that the Japanese are free to be sticklers for white and stick to tradition, but that it will not pass muster6 in the international arena.

As for why blue itself was chosen, as opposed to e.g. red (as in the red/blue uniforms in taekwondo, wrestling, boxing etc), Geesink himself did consider red judogis early on: 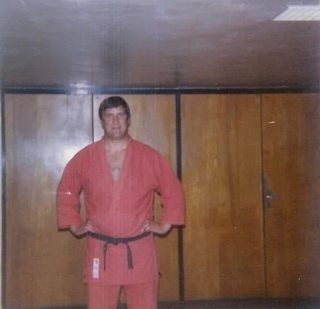 Though I presume they were ultimately discarded in favour of blue to ensure any cuts were quickly noticed, since blood would not show as clearly on a red uniform (as indeed is the rationale of the JBBA).

The following report makes the curious claim that the contrasting colours have greater symbolic implications, though I'm not certain what the explicit meaning is:

Although it used to be the tradition for practitioners of judo to wear a “judogi” that consisted of a loose-fitting jacket and trousers in white cotton, the International Judo Federation (IJF) decided at a general session held in 1997 to introduce blue cotton judogi as a sign of the international status of the sport.

Not the answer you're looking for? Browse other questions tagged judo gi sport uniform or ask your own question.

13
What do the colors of Gi in Jiu-Jitsu mean? Which should I get?
5
Why kata competitors wear red and blue belts?

9
Judo gis for lanky players?
10
Why are traditional karate gis white?
5
Why kata competitors wear red and blue belts?
5
When/why was the list of Kodokan Judo throws and ground techniques recently expanded?
7
Why were leg grabs removed from competitive judo?
4
Is the "baseball choke" legal in Judo?
2
Is it ok to sew the sides of my Judo gi?
8
How many international judo competitors throw ambidextrously?
1
How long should a judo belt be?
1
Average height of competitors for each weight category in Judo?