Risk of head injuries or cognitive impairment from training BJJ?

I recently started training BJJ and after certain classes I've felt light-headed, mentally slow and will sometimes even have a headache. These symptoms can sometimes span a couple of days. This led me to have a few questions I couldn't find answers for online.

Firstly, what, if any, research is there on cognitive damage from training BJJ?

Secondly, is it possible to be losing brain cells simply by having a lot of pressure being applied to your neck or head from a choke?

And lastly, are there any practices within BJJ that are known to be riskier with respect to brain damage that should be watched out for?

Head injuries in Judo and possible differences between Judo and BJJ

The studies1 quoted in this answer about head and neck injuries in judo come to the conclusion that:

Two differences between BJJ and Judo which may make contribute to higher injury rates in BJJ:

Since the authors of the above study explicitly cite "lack of falling skills" among "inexperienced" judoka (those practising < 3 years) as the most prominent cause for head injuries in judo, this last point seems particularly pertinent.

A study of injuries in BJJ5 reported only one injury from choking techniques, being a neck strain:

There was 1 neck injury, a cervical strain, caused by the BJJ “triangle” technique, a type of choke (Figure 2).

There is also a single case study16 of a person suffering a carotid dissection and subsequent permanent weakness on the right side of their body, forcing their retirement. The author of the case study notes that though such arterial dissections have been noted before in other martial arts, they are usually the result of strikes, not chokes. As such, they hypothesize the following:

The resultant traction would suffice to stretch and rupture the intimal layer of carotid artery distal to its point of fixation (Fig. 3). 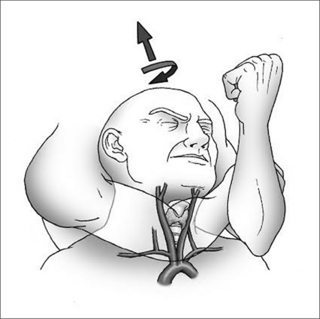 A second study22 found that a quarter of BJJ practitioners reported concussion as a result of practice:

Comprehensive analysis of injury rates, types, and causes in BJJ

Lastly, among the sub-sample with sufficient data to determine what events lead up to the injury—47% for BJJ and 48% for Judo—a majority of individuals were injured from being struck or landing (BJJ 65% and Judo 57%).

The study reports that the most common head injury in BJJ was lacerations:

Our study found striking to be a leading cause of injury for both the striking sport, MMA, and non-striking sports, BJJ and Judo. This finding may indicate that the rules prohibiting striking in BJJ and Judo are not sufficient or require better monitoring or enforcement.

And that injuries more often occur in training than in competition:

The study comes to the conclusion that many injuries could be avoided in BJJ by increased training in ukemi:

The most frequently injured body parts for BJJ that we found were the head, neck and trunk, which is inconsistent with prior research showing the knee and elbow were injured most often (Kreiswirth et al., 2014; Scoggin III et al., 2014), but may be explained by the wider variety of takedowns permitted and the dynamic use of one’s core. However, the most injured body parts in BJJ competitions were the arm and shoulder, which may be due to the use of joint locks, but remains ambiguous; most narratives mentioned the patient feeling a ‘‘pop’’ before their injury and only one narrative mentioned a ‘‘wrist bar’’ maneuver contributing to injury. Lastly, a large proportion of competitors’ injuries to the head, neck, and trunk in BJJ were a result of their opponent landing on them or accidently striking them. Our findings indicate that numerous injuries could potentially be avoided by increased training in proper falling techniques as is frequently taught in Judo (Pocecco et al., 2013), as well as protective gear that better absorbs the impact of accidental strikes.

Competition
3. The prevalence of injuries in Jiu-Jitsu according to the report of the athletes participating in 2006 world..., 2012
5. Assessment of Injuries During Brazilian Jiu-Jitsu Competition, 2014
6. Incidence of Injury Among Male Brazilian Jiujitsu Fighters at the World Jiu-Jitsu No-Gi Championship 2009, 2014
11. Sports injuries and ill-health episodes in the Cali 2013 World Games, 2016
20. Injury prevalence in Brazilian jiu-jitsu athletes: comparison between different competitive levels, 2018 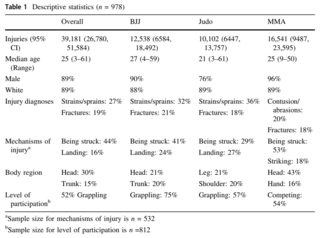 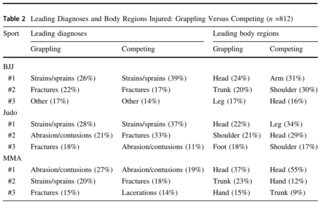 Not the answer you're looking for? Browse other questions tagged brazilian-jiu-jitsu brain-injury or ask your own question.

11
Does practising judo increase the likelihood of sustaining a brain injury?
5
Can spinal injury occur from rear naked choke

17
Do all schools of BJJ come from the same root?
11
BJJ- Gym training that is beneficial (specific to BJJ)?
10
Risk of brain damage in casual/moderate Muay Thai sparring
8
How do you prevent/mitigate finger injuries in judo/bjj?
6
Will training Muay Thai affect my BJJ skills?
5
Extra training to avoid new injuries
4
Where to get lightweight belts for bjj competitions from?
9
How has BJJ innovated since diverging from Judo?
6
Is there a risk of brain trauma in light sparring Muay Thai?