Why is a “scarf hold” so-named if you don't wrap around the opponent's neck (like a scarf)?

Judo's kesa-gatame is often translated as "scarf hold", but the technique is defined by wrapping your arms and upper body around uke's neck and arm, more like a seatbelt, as opposed to wrapping around just their neck, like a scarf. Why is it called this?

When translating foreign technique names, sometimes there isn't a perfect analogue in the target language e.g. "tomoe" in tomoe-nage translated as 'circle'.

The "kesa" (袈裟) in kesa-gatame in fact refers to a type of buddhist robe, the Kāṣāya. While historically it was worn covering both shoulders, in current Japanese Buddhist style it is wrapped across the body with the right shoulder exposed, as is the style in which the Buddha is traditionally depicted: 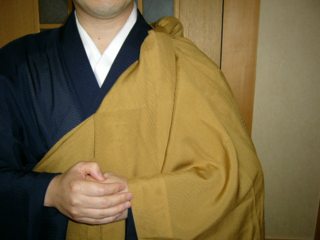 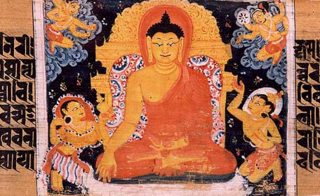 *Kesa means the cope or surplice of a Buddhist priest. This vestment has very large lapels which are crossed diagonally on the chest. Hence the name of the 1st Immobilization.

Not the answer you're looking for? Browse other questions tagged judo terminology japanese uniform pins or ask your own question.

3
Why is ude-garami legal if it is effectively a shoulder lock?
3
Is the North-South choke legal in Judo?
5
Why is judo's Katame-no-Kata so free-form relative to Nage-no-Kata?
6
What does “create a frame” mean?