How effective are nunchaku as a choking weapon?

Numerous countries make it illegal to be in possession of nunchaku because they are claimed to be a weapon designed for choking. When I practiced Matayoshi kobudo in the WOF (admittedly for a relatively short time), the length of the rope or chain on our nunchaku was supposed to be one palm width. I'm having a hard time imagining wrapping a rope of that length around the average person's neck and getting a more effective choke hold than, say, using a stick.

Are there choking techniques that are significantly easier with nunchaku than with common objects?

Your confusion may be that you're thinking of the nunchaku chain wrapping around the neck, as a choke to cut off air, but the proper technique uses the sticks to apply pressure to the carotid arteries on either side at once, using the target's neck as the fulcrum for the levers. 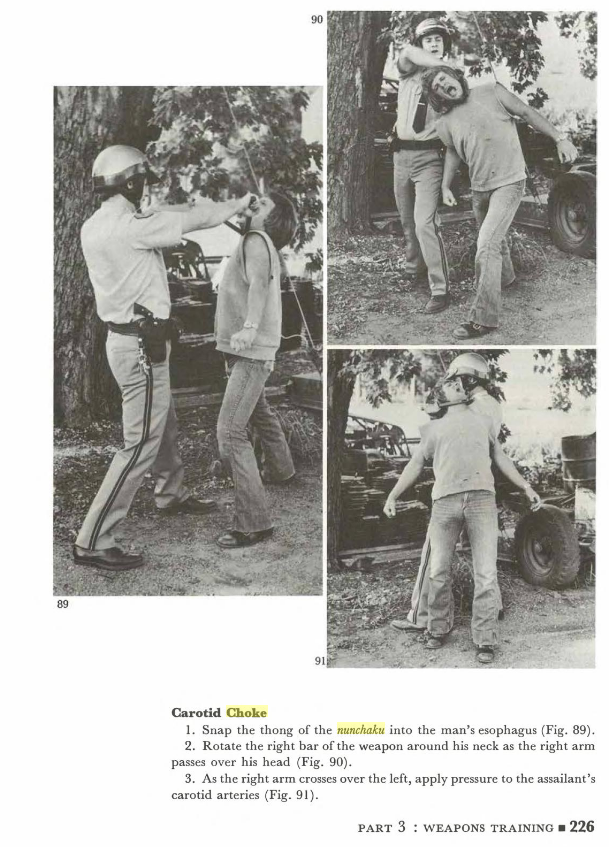 For the practical part, first see Sean Duggan's answer. Then consider the fact that even though it is not technically "choking", the nunchaku will work the other way around as choking instrument perfectly fine, too. What you basically have is two levers that allow you to exercise a large amount of force (roughly 1:10) on what's wrapped in the chain. That may be the windpipe and/or carotids, or it may be something different.
Such as the upper part of the Trapezius muscle together with several not-entirely-unimportant cranial nerves and mid-sized arteries, and finally, depending on how much force you excercise, the vertebrae and the medulla.

Wrap the nunchaku around your calf to get an impression of how much damage you can easily achieve with this instrument (even if it's technically rather "crushing" than "choking"). That's definitively a no-fun experience.

For the legal aspect, what decides on whether an item is outlawed usually depends on whether there is a legitimate use, where "injure and kill" does not count as legitimate use. The appearance of words such as "choking device" is secondary, it's merely a safeguard to include as many modifications as possible and make it harder to circumvent the law and weasel your way out. Think of the half-legal drug scene where this exact thing happens every week. At least here, the law is worded in a pretty stupid way such as to forbid rather than explicitly allow substances. A small, pharmacologically insignificant modification to an illegal substance, and it is not illegal any more (though, the same thing). So you can sell it for a couple of months until it is explicitly forbidden. Not so with a nunchaku because of "choking device".

The "legitimate use" aspect is also the reason why e.g. some knives are perfectly allowable to be owned and carried, some are allowable to be owned, and some are illegal to even be owned or traded. Also, the "general use" may come into play, which may not always make sense. For example, butterfly knives are outlawed here because of their specific use by a particular group of people, not because they're particularly dangerous (if anything, they're a danger for the wannabe wielder's fingers).

For the most part, however, it's all about whether an item has a legitimate purpose or is "designed for harm". For example, in my jurisdiction, you may carry a knife (with the exception of public events) provided that it isn't sharpened on both sides, isn't springloaded, or can at the same time be opened with one hand and locks in place, and has a blade shorter than 7cm (12cm for not foldable). Because, well, that's a knife which you can arguably use for a lawful purpose, so in the sense of self-fulfillment of the individual, it is your right to have it. At the same time, you may not even possess a springloaded knife if the blade comes out at the front, or a fist-knife which has its blade perpendicular to the handle as these are considered "insidious assault weapons", which they probably are, too. It's hard to come up with a good explanation for a legitmate use other than attacking a person when the blade is formed in a way so it's quite impossible to e.g. cut a piece of bread.
Similarly, you may not even possess throwing stars at all as they have no known legitimate purpose (can opener?!). Which is funny because when I was 14 years old, "Ninja" was totally en vogue, so everybody and their little brother, me included, had them. These were sold over the counter to 14 year olds no problem. Today they're "illegal weapons".

7
Correct position to leave an attacker after choking them unconscious?
4
Slashing vs thrusting (bladed weapon vs pointed weapon)
1
Nunchaku demonstration under-the-arm protective pads
5
How are arm-triangle chokes classified in Judo?
6
How are chokes/strangles classified in Judo?
5
What is the difference between choking somebody to death and choking them to unconsciousness (technique-wise)?
2
How should nunchaku be used?