How to beat a Kickboxer with a Bruce-Lee-type stance and a Taekwondo/Karate background?

How To Beat Karate/Taekwondo Fighters

Basically, keep your hands up to block the hook kick and the spinning side kick. And don't focus on catching the side kicks, instead take them and then counter with leg kicks. Leg kicks are the key. When you get up close, alternate between punches to the head and the body.

This is about sparring. There are a few guys in my gym (Muay Thai/Kick Boxing) who have Taekwondo/Karate backgrounds. They have a Bruce-Lee-type stance. Their front hand is low and legs are wide apart. I have a more Dutch Kickboxing style stance with my right hand glued to my chin and my left hand slightly out to throw fast jabs and to parry (see image). My legs are a bit more wide apart and angled than traditional thai stance (sort of like a boxer). 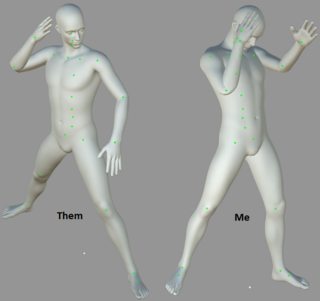 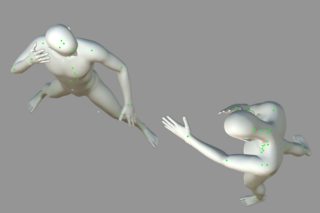 When we spar during the class, they keep throwing these hook kicks with their front leg. This is quite annoying. I am a pressure fighter, so I can't really move around like a Muay Femur. These guys are very light on their feet and they have an "in-and-out" fighting strategy.

I also can't get to my combos. They are a bit too far to throw and properly connect with punches. It is really annoying. They are in range for throwing their side kicks at me; but I can't throw tips (front kicks) with power given the surface area on their body that is facing me is very small. Also, tips are not very effective since they keep moving backwards. If my tip (front kicks) slips off their body, I would be severely off balanced and vulnerable to other strikes.

Now I can see their roundhouse from a mile away - that is not a problem.

Their hook kicks and sidekicks are very tricky to understand. It's almost like long range jabs - hundreds of them. It's hard to close the distance to work the body with these guys. They keep moving around so much.

I have a done a few things, which I learnt from the fight between Joe Valtellini and Raymond Daniels, that have worked for me to a limited extent (see Edit).

How do you beat a Kickboxer with a Bruce-Lee-type stance and a Taekwondo/Karate background that keeps throwing side kicks and hook kicks with the front leg?

I am wondering if any of you can share your experiences and what worked for you. I really want to know other ways to handle the situation.

I want to know other effective striking combinations (apart from resorting to leg kicks to their front leg) and ways to defend those pestering hook kicks.

Edit 1: Here is what I am working on right now.

It goes without saying that for a Bruce-Lee-type stance in kickboxing, the most lethal weapon is a good leg kick combo - I believe have got this. But it's difficult to use it. In the fight video I posted, you will see that Valtellini did terribly against Daniels and his sidekicks to Valtellini's thigh and knee areas in the first round. Daniels has a Karate background.

Daniels was moving like a butterfly and stinging like a bee. But once Valtellini started connecting a few leg kicks, Daniels got slower. He couldn't move as swiftly as he did in the first round. Valtellini was able to figure this out because he comes from a Taekwondo background - perhaps he knew very well how to counter Daniels' style.

But I have no experience fighting someone with that kind of style. And it takes a lot of persistence and footwork to cut off angles. Usually, the front leg in that wide stance is vulnerable. A deadly counter is to set up a combination of Left hook to the body (which is open) and then throwing a heavy leg kick. And then repeat. The goal here is to attack the front leg. I am working on this at the moment.

But I can't keep this up for long, and I can't do this effectively. I can't seem to be able to cut the distance for their side kicks and hook kicks.

If you are getting caught by front leg side kicks then this means you are putting yourself in the way of them.

A couple of rules of thumb against leggy people.

So how do I attack that leggy person? Well there are two options here

The trick here is to get into range without it being totally obvious to the opponent that that is what you are doing, constant footwork can disguise the moves that bring you into range. Also consider where you are on your opponent - You don't need to be able to see a target to hit it - if you get to the back of someone their options become very limited and you can still land scoring points to the front (this is very rule-set dependent of course) if they turn around to face you with you close - then you can pick them off easily as they turn

10
Effectiveness of low kick to inner thigh of opponent's leading leg in mauy thai boxing?
7
Taekwondo training to help Karate-do kicks
7
WTF Sport Taekwondo - Beating front-leg fighters
4
Is the Push Side Kick a Taekwondo technique?
4
How to counter a grab to a kicking leg?
4
How to counter a powerful Left Roundhouse Kick from a Southpaw in MT?
1
Problem with kicks and legs
3
How do I set up a sliding/hopping power sidekick?
14
Etiquette for sparring with women - How to find the balance and not do disservice?
1
Kick with front leg vs. back leg