What is the purpose of Baguazhang deerhorn knife having some of its blade protruding/pointing inside?

i know potentially it can be a handguard/armguard protection but so far as i see, most of this also sharpened or very pointy. (correct me if iam wrong, especially the historical or authentic one)

here example image, imagine if the staff wielder or the person that push it is stronger, wont that end up badly if the deerhorn knife part stab the wielder instead ? (i mean in a fighting situation, and even if that part is not sharpened it probably can hurt or even break a rib of the wielder) 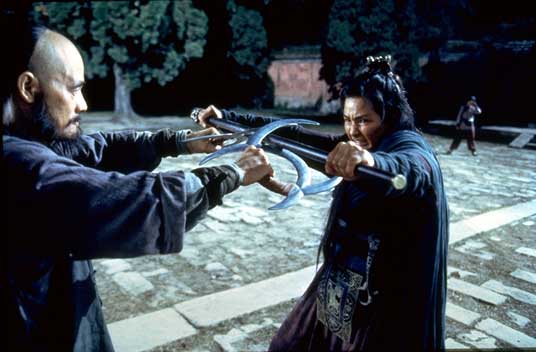 from:Deerhorn Knives | Nei Gong, Taijiquan | Canada, USA, UK | Taiji Online its from taiji-online.co.uk (due to my country blocking the site i cant check the link myself, so i direct it to the google one instead) 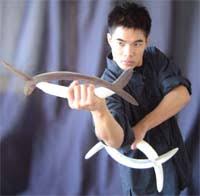 feel free to edit the tag to the appropriate one.

If you are engaging force-on-force, you are making a fundamental bagua error. Circle walking and palm change training is all about changing these fighting angles so you do not have to oppose force with force directly. For the situation above, one example of applying this principle would be to slide a knife along the opponent's staff to attack the opponent's fingers.

Defense has multiple elements: footwork, body, and hand movement. Combining these elements allows you to both improve your chance of successfully defending an attack. If an attacker swings at you with a bat, you don't stand in one place and block with a knife. This would be a hand-only defense. You move to evade the attack and use your body and hand movement to deflect the attack, or you move and counterattack directly.

This instructional video with a baseball bat attacker should give you an idea. Don't block the massive weapon. Evade and attack. With weapons of your own, obviously your attack will be different, but the footwork to close and avoid the weapon will be the same.

Fight choreography has actors do many inadvisable things to dramatize entertainment.

I have not learned these weapons, so I cannot comment more on their design.

As I noted above, I'm not a practitioner of Chinese martial arts, so feel free to take this with a grain of salt, but this fellow has a treatise on using the weapons that suggests they're not that dangerous to the user.

The most common complaint about these blades is that they are more dangerous to you than your opponent. The danger of cutting yourself on these seems like an inherent risk. To discern if this is an actual danger, two things need to be looked at; the ease or difficulty one has wielding the weapons without touching themselves in a way that would allow for a cut, and how sharp does the weapon need to be.

Through all of my time using these in solo forms and sparring, I have never had a problem with hitting myself or delivering cuts to my own body accidentally. Even the points of the weapon don’t do much more than limit your movement in order to avoid them. So, even if these had a razor’s edge on them, (which I do not think is necessary for this weapon to be effective) the danger of cutting one’s self would seem to be limited to the non-combat time handling of the weapon (cleaning, transporting, concealing etc.).

They do not do much discussing of the inner prongs for attacking, but they do allude to using those points to dissuade attempts to disarm.

One very interesting thing that we have stumbled upon recently is that they are very difficult to disarm. The position of the blades, their curvature, and the size of the weapon make it very easy to poke at the hand of and other wise dissuade the opponent from grabbing on to your hand or the weapon. If the blades are sharp, it can also cut someone who tried to grab at the hand or wrist. But even here, the blades do not have to be sharp to stab the hand enough to get them to let go.

4
what is the real history and purpose of silat in a fight?
4
What Resources Are There For Knife And Sword Rights Activism In The USA?
7
What is the purpose of slow movements in poomsae / kata / taolu for?
4
What is the difference between a sword and a knife? Which are machetes?