Is there a technique/trick to maintain balance when fighting in close combat on a ship, armed or unarmed?

I mean like a stance or something without grasping an object like a rope or other solid object to not sweep away. When I mean armed I mean something like a sword, spear, or other melee weapon.

The example that I found regarding armed fighting on ship is from another SE, but I cant read or get the context.

From the Royal Museums Greenwich Instructions for training a ships crew in the use of arms in attack and defence by Lieutenant William Pringle Green and another for unarmed from Savate/Chausson/French KickBoxing, but I don't get the context or the application to stay balanced while fighting on ship.

The image is from: History of Savate 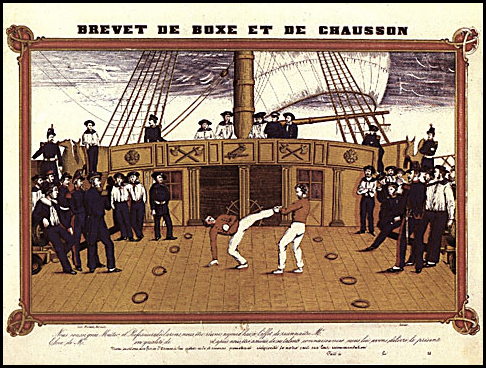 If this is considered too broad then just focus on the armed technique or trick. I am more curious regarding armed fighting on a ship, minus knife fighting though.

In the absence of other responses, I will give a kung fu perspective. I have no personal experience with savate, so I cannot productively comment on it or your reference.

Your normal fighting stance should be flexible and adaptive to allow movement in multiple directions and stability from force in multiple directions. You can train this by maintaining your stance somewhere that subjects you to unexpected forces. This does not need to be a ship; a bus or train will allow you space to stand up and practice at maintaining your stance while subject to bumps (on buses), acceleration, braking, and forces from turning. In any of these situations, you practice supporting yourself using your legs, absorbing forces and trying not to step. You need to find the right combination of strength and relaxation to do this without relying on hand supports.

I do not think it matters whether you have a weapon.

Not the answer you're looking for? Browse other questions tagged technique kung-fu weapons stance historic-european or ask your own question.

5
What should I be looking for in my first, trial class? [For Chinese arts specifically]
8
Has there ever been a boxer who fought like Prince Naseem Hamed?