When was throwing introduced to martial arts?

Throws seem mysterious to me. Just the idea of being able to move your body in such a way that you are able to physically pick someone up without your hands and land them on their back seems like a "how did anybody ever come up with that" kind of thing. The earliest I know of throws existing is the samurai learning Jujutsu, but I'm not sure if that was the first use. I have even learned a few throws in my time doing BJJ, but I still have questions:

I understand that the second question may be harder to answer, so at least try to answer just the first, the second is bonus.

Wrestling has been a part of most societies since time-immemorial: 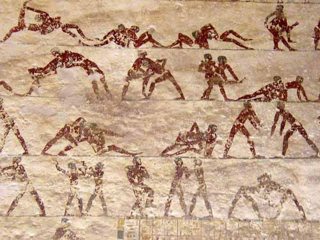 And the earliest known manuals are from Chinese classics:

However there are illustrations of and references to existing traditions dating much much earlier, with the oldest recorded example of Chinese wrestling (jǐao dǐ) from a military clash in 2679 BCE.

There are only so many ways one can off-balance and throw an opponent, and so there is a lot of overlap in techniques in various independent styles of folk wrestling and martial grappling.

For example, there are many throws similar to judo/jujutsu techniques in Historical European Martial Arts manuals. Below are some examples from a German grappling (Ringen) manual:

The codification of wrestling and throwing is human, but still pre-historic. From the indigenous wrestling cultures that still exist we can infer that prehistoric people wrestled casually in jackets on grass plains like Mongolian Bökh, in manicured indoor dirt pits like traditional Indian wrestling, in rings with lots of ceremony (and a little striking) like sumo, covered in olive oil and grabbing inside each other's leather breeches as in Turkish oil wrestling, and certainly in many more variations. Getting acquainted with the variety in ancient wrestling traditions is a good way to expand one's understanding of humanity's relationship to combat sports.

Not the answer you're looking for? Browse other questions tagged history jujutsu style throwing or ask your own question.

7
What is the difference between judo and wrestling?
3
Origin of the triangle choke?

7
When was the Southern Shaolin Temple destroyed?
8
Problems hip throwing a larger opponent
5
Judo throw/techniques for taller people
5
When/why was the list of Kodokan Judo throws and ground techniques recently expanded?
6
Did Jujutsu invent the Heimlich Manoeuvre? If so, when?
0
To what extent can (and should) throws be used in Brazilian Jiu Jitsu?
3
What is the value in preserving traditional martial arts in the mixed martial arts era?
3
Throwing into the ground vs ground fighting?