How to counter a rear bear hug?

The US Army hand to hand combat manual gave a solution like this: 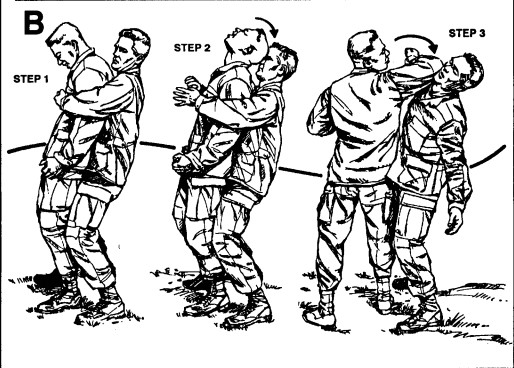 But I guess that won't work if your opponent is shorter/taller than you or they kept their head slightly to the side. So is there a way to effectively counter moves of this kind? Will a parkour roll possibly work?

I did learn a different approach with more components in Krav Maga. Something very similar can be seen here, with groin strikes (move your hip to the side, hit with a hammer fist between the legs) added before the elbows. I am a bit critical of that video as, for example, you will probably not have enough space to hit the sternum with your first elbow in a real struggle:

Another possibility I almost forgot about is described in this video: You basically do steps 1 and 2 (the breathing stuff eases the whole loosening part) and then move your hips to the side and one leg behind the opponent, pushing his hips back with the arm that remains in front of the opponent (can be done with an elbow to the groins as well). Then you straighten your leg behind the opponent's legs and drop your weight, forcing them to the ground. Even better would be to drive the straightened leg and all your weight sideways into the opponent's thigh so that you get your hips behind and below theirs and can hook behind their other foot so that they cannot step out (see here). As soon as the opponent starts to fall (sad this is not included in the video), turn your upper body towards the opponent (you always stay footed with the remaining leg, thus you can initiate the turn using the foot). For good measure, I'd land with my elbow first driven into the opponent's abdomen. That way, you minimize the disadvantage of going to the ground and prevent landing in a position with your back still turned towards the opponent.

There are other videos like here where you don't go to the ground but throw the opponent around your hip, grabbing both legs. I don't see why any person in their right mind would let go and not pull you to the ground as they fall in that case, though.

I am generally skeptical when it comes to these techniques as they somewhat depend on pain compliance: There is no guarantee that the offender simply lets go when hit, or doesn't immediately go for a rear-naked choke instead. On the other hand, the position is bad, and using a shock move is better than doing nothing.

As for the parkour roll, I'd say that if you have an offender who knows how to manipulate your structure and balance, this will be hard to pull off. You are very easily lifted and if they step back you are off-balance.

This position was the teaser lesson to convince students to join wrestling. The position is basic enough that with near-size parity it was expected that everyone could learn to get out with a 15 minute lesson. Unfortunately, I do not remember the terminology for it.

Lifting the arm starts to create space, and the shoulder movements get your whole body power into manuevering out of the arms. As the person behind, if you have not already started to attack the balance, it's very hard to maintain the hold.

From a wrestling point of view, this particular rear position is not actually one you want, so it's not easy to find a wrestling instructional video. You have more control and it is harder to escape if you grip up two-on-one arm. Your head goes to the side with the controlled arm, and you leave the other arm free. It is much harder to escape from this position than the bear hug over both arms, which is why the teaser lesson was from the simpler position.

This is bringing back memories of the "self defense" techniques I learned in Chuck Norris Tang Soo Do some decades ago... unfortunately, I've learned that most of these techniques really don't work.

That said, one additional thing we learned was that, as soon as the hug starts getting applied, to shoot the arms forward and drop our body weight into a squat, the idea being that pushing the arms forward instead of directly against the squeeze, and dropping, makes it more likely that you squirt out underneath the bear hug before they can secure a good grip with the side benefit that even if they still have hold of you, you've got a good start on dropping your center of gravity below theirs.

Purely anecdotal, it actually did work for me against a guy about the same size of me in high school, although he wasn't really trying to hurt me, just messing around. When he grabbed me from behind, the drilling kicked in, I dropped my weight, thrust out my arms, and broke the hold. Fortunately, I stopped myself before I continued with the elbow strikes and the throw.

Here's a method that works (despite height and/or weight difference): as soon as they grab you, grab one of their wrists or lower arms (preferably the arm on your dominant side) and hold it tight to the body. Elbow them sharply in the ribs until their grips loosens, maintaining a hold on the arm. The best throw in this case would be an ippon seoi nage, which is a fairly simple throw to learn and the arm/s are already in the proper position for the throw.

Hopefully you never have to use this, but when it happens you'll be prepared.

Not the answer you're looking for? Browse other questions tagged self-defense streetfight or ask your own question.