Why is a single armlock common in depictions of pankration but not in modern MMA?

The sport pankration in the ancient Greek Olympics is similar to today's mixed martial arts in that it restricted only a few particularly damaging attacks so that competitors will use a mix of stand-up, wrestling, and groundfighting. But something I've noticed in many depictions of pankration is the use of single arm locks (attacking shoulder or elbow) after taking someone's back. It just seems unusual to me because in MMA, back takes usually end up in rear naked chokes, which seems like a much more stable option.

Was this actually a common offense in pankration, or was it just artistic cherrypicking? If it was common, why do we see it in ancient pankration but not modern MMA (e.g. ruleset)?

Pancrastinae, a Roman sculpure based on a lost Greek original. It depicts a fighter taking the back of an opponent on 1 hand and knees and using his left hand to hyperextend his opponent's right arm. It's hard to see from this angle, but his left leg is hooked around his opponents' to prevent him from easily turning and relieving the pressure on his shoulder. 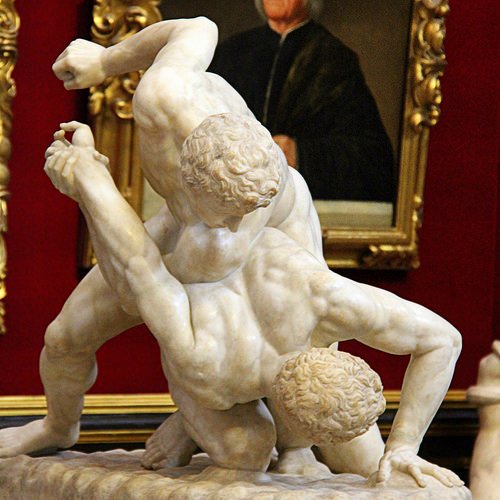 There could be a number of reasons for this:

It's important to note the majority of artistic impressions of wrestling/pankration are that - art. They're not supposed to be educational or training resources, and so artistic reasons will take precedence over practical ones when decisions are made.

Choking/Strangling techniques are absolutely present from the historical record in pankration/Greek wrestling, and I would suggest it is probably due to reason 3 above that we don't see them as frequently in artistic representations.

Not the answer you're looking for? Browse other questions tagged mixed-martial-arts pankration or ask your own question.

14
Is there a reason why wing chun is uncommon in MMA
10
Why is wrestling often not seen as a martial art?
7
Is the head-outside single leg takedown relevant in MMA?
5
Why are some people just not getting knocked out?
3
Why do MMA fighters seem to duck down before they throw a right hand?
7
If yelling is so good, why MMA fighters don't yell often
7
Why is the bob and weave not used much in MMA & Muay Thai or outside of boxing in general?
3
Why aren't more forms of deception used in MMA
1
Is it common for MMA fighters to fight with fractures?